Students stormed the streets in Ibadan, the Oyo State Capital on Wednesday, protesting the persistent closure of schools as a result of the strike action of the Academic Staff Union of Universities.

The students’ protest began from the Trans-Amusement Park to the Federal Secretariat, Ikolaba, Bodija, Ojurin, Iyana Sango, and Aare areas of Ibadan.

This was as other students had vowed to hit the streets in Osun, Ogun, and Ondo states.

Students of Obafemi Awolowo University, Ile-Ife, Osun State, had also slated a protest, beginning from the campus’ gate on Thursday under the aegis of Fund Education Coalition.

The Student’s Union of Adekunle Ajasin University, Akungba, Akoko in Ondo State, has also declared a mass protest to hold on Friday.

In a statement signed by the President, General Secretary, and Public Relations Officer of the Union; Ogunsanmi Kolade, Adeyefa Tolulope, and Akinsulure Simbo, respectively, the student body noted that the protest would begin at the university’s main gate.

See some pictures of the protesting students in Ibadan: 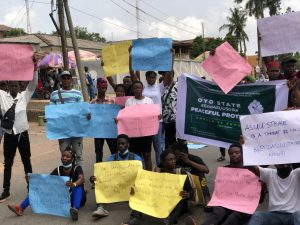 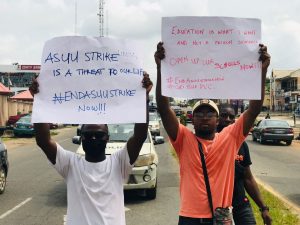 Also, the Chief of Staff to the President, Prof. Ibrahim Gambari, alongside the Minister for Labour and Employment, Chris Ngige, has invited the leadership of the Trade Union Congress to a meeting in Abuja on Thursday with regard to the ongoing strike action of the Academic Staff Union of Universities.

The letter, titled, “Invitation to a ‘Tripartite-Plus Meeting’ on the Ongoing Industrial Actions by the Academic Staff Union of Universities (ASUU) and other Trade Unions in the Nigerian Universities”, was addressed to the President of the TUC, Mr. Quadri Olaleye, on Wednesday, stating that the meeting was scheduled to hold at the Banquet Hall, State House, in Abuja, the Federal Capital Territory.

This came after the TUC had, on Tuesday, threatened to join the strike action if the Federal Government could not resolve issues with ASUU.

“The Nigeria Inter-Religious Council (NIREC) would be a part of the meeting.”

The strike action of the lecturers has entered 86 days.