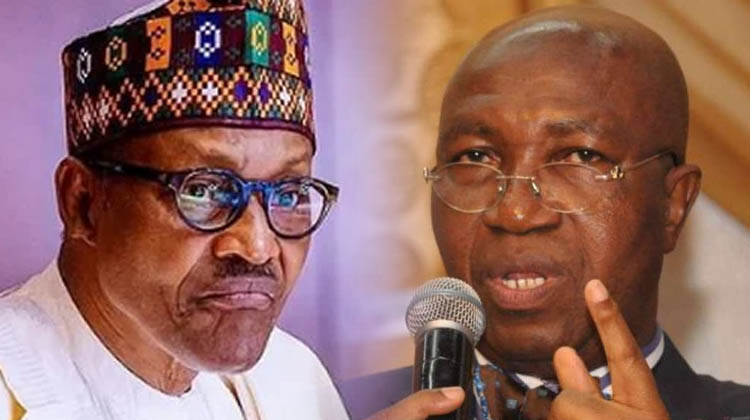 The Chairman of the Body of Benchers, Chief Wole Olanipekun, on Wednesday, faulted the call by an octogenarian and legal practitioner, Robert Clarke, on the President, Major General Muhammdau Buhari (retd.), to extend his tenure on account of the nation’s security challenge, describing it as unconstitutional, immoral and threat to the nation’s democracy.

According to him, no provision in the constitution supports Clarke’s proposition, adding that the only situation where an election could be shifted was when the nation is at war with a foreign country as provided in Section 135(3).

Olanipekun, also a former President of the Nigeria Bar Association, in a statement contended that the current security challenge in the country could not be equated with war envisaged under Section 135(3) of the constitution.

He, therefore, urged Buhari to resist every temptation to stay in power at the expiration of his tenure.

He wondered why Clarke, who condemned ex-President Olusegun Obasanjo’s bid for a third term, would turn around to advise Buhari to engage in direct breach of the constitution.

He said Buhari was not expected to deal with all the nation’s challenges before vacating office.

Olanipekun said, “I am afraid, I cannot agree with the postulations and prognosis of my learned friend of the Inner Bar (Clarke) as, same, with much respect to him, are not constitutional, legal, legitimate, moral, democratic, acceptable, reasonable, or in the best interest of Nigeria and Nigerians.

“While it is glaring that Nigeria is bedeviled by a mountain of daunting challenges, including insecurity, this cannot be any justification for a call for PMB or any President, howsoever, to extend his tenure outside the constitutionally provided maximum period of eight years, as prescribed by the combined provisions of sections 135(2) and 137(1)(b) of the constitution of the Federal Republic of Nigeria, 1999 (as amended).

“With further respect, the suggestion is a direct call to breach of the constitution, as well as its spirit, tenor and letter. There is no gainsaying the fact that the end result of such a proposition would further compound the conundrum that we have steeped into and, plunge us to a latent state of anomie.

“It is quite disturbing, unfortunate, uncheering, and very worrisome that since 1999, Nigeria has been migrating from one problem to another, oscillating from one crisis to another; graduating from one degree of catastrophe to another; as a result of which the landscape has become a practicing pitch for all sorts of theories, ideologies, ideas, suggestions, prognosis and hypothesis, the last of which has just come from the respected Chief Robert Clarke (SAN).

“As stated earlier, this suggestion, if considered at all, how much being implemented, would no doubt aggravate our already compounded woes and terminate the survival of the present democratic adventure. It is apt to caution, applying the old adage: ‘ye deity, if you cannot improve or salvage my situation, leave me as you have met me.’

“To PMB, my honest, friendly, professional and civic advice is that he should treat this advice or any invitation to him to extend his tenure by a millisecond beyond May 29 2023, with a pinch of salt. It is in our collective interest if this proposition is nipped in the bud.

“In parenthesis, the President does not have the power to extend his tenure; no President has that power or vires to so do.

“If, for example, as rightly surmised by Chief Robert Clarke, that Obasanjo did a ‘negative act’ by seeking a third term in office, wanting to goad the National Assembly into rubber-stamping his unconstitutional bid, why then is the High Chief Clarke prompting PMB to follow the same illegal and undemocratic route?

“To my mind, this is a suggestion akin to advising PMB to embark on a third term bid or adventure like OBJ, who Chief Robert Clarke pointed out as having done a ‘negative act.’

“The celebrated case of Marwa V. Nyako (2012) 6 NWLR (Pt. 1296) 199 resolves all issues and doubts relating and pertaining to the certainty and sanctity of the eight-year maximum period permitted by the Constitution for a Chief Executive, either of the State or Federation.”