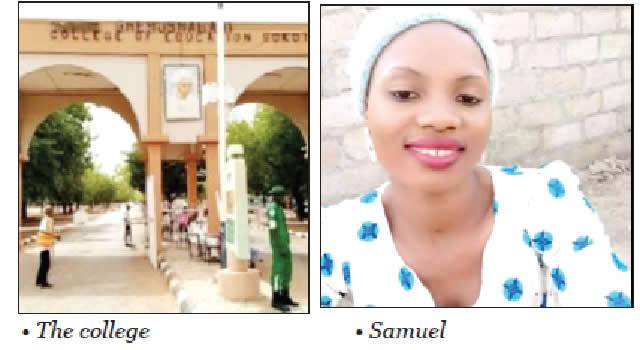 The corpse of the female student of Shehu Shagari College of Education Sokoto, Deborah Yakubu, who was killed by extremists for alleged blasphemy has caused controversy in her community.

Deborah, who was stoned to death and burnt by her fellow students for allegedly making a blasphemous statement on a WhatsApp group, has divided her community over whether she should be buried or not.

Her remains, meant to be laid to rest in her hometown, Tungan Magajiya in Rijau Local Government Area of Niger State on Saturday, has been hijacked by the youth in her community who insisted that the corpse should be returned to Sokoto to be properly delivered to her family.

While the family insists on burying her, the ECWA Church leadership and the youth insist on returning the corpse to Sokoto state.

The deceased uncle, Emmanuel Maji, a pastor with ECWA in Tungan Magajiya who spoke in Hausa in a telephone interview with our correspondent, said the father of the deceased received a call on Friday to come and collect the remains of Deborah for burial.

Maji added that the deceased father left on Friday and returned with her remains on Saturday morning.

The uncle also said when the leadership of the church got wind of the invitation to pick up the corpse, they tried to stop the movement of the corpse without proper discussion with the government of Sokoto State or the State Police Command.

“Our leaders said that they do not agree that she should be brought back just like that without being accompanied by government officials or officials from the school.

“Since Deborah was killed in school by her fellow students, we feel that she has become government property and should be treated as such.”

He added that the father of the slain girl was in the arranged commercial vehicle returning with the body when the driver was called and allegedly instructed not to pick up any calls.

Maji narrated that after the call, the driver subsequently switched off his phone. He added that the deceased father and family members could not ascertain who arranged the vehicle that conveyed Deborah’s remains back to Minna.

“When the driver got to the compound, we tried to ask him questions, he just threw the corpse down and drove off which angered the youth who almost started protesting until they were pacified.”

Maaji further stated that the leadership of ECWA insisted the body should be deposited in the mortuary while they reach out to the government of Sokoto State but the father and others insisted on burying the girl.

“While the church was trying to ensure that the right thing is done, the family felt that we were being unfair to them by asking them to deposit the remains in the mortuary.

“They said after such a great loss, we still don’t want them to bury her bones.”.

Maji stated that Deborah’s mother has been down since the news broke while the father couldn’t also speak at the time of the call.

Another uncle of the deceased who was contacted simply said “I can’t speak to journalists at the moment as we are preparing for the burial.”

Afterward, the youth of Tungan Magajiya hijacked the corpse and deposited it in the mortuary.