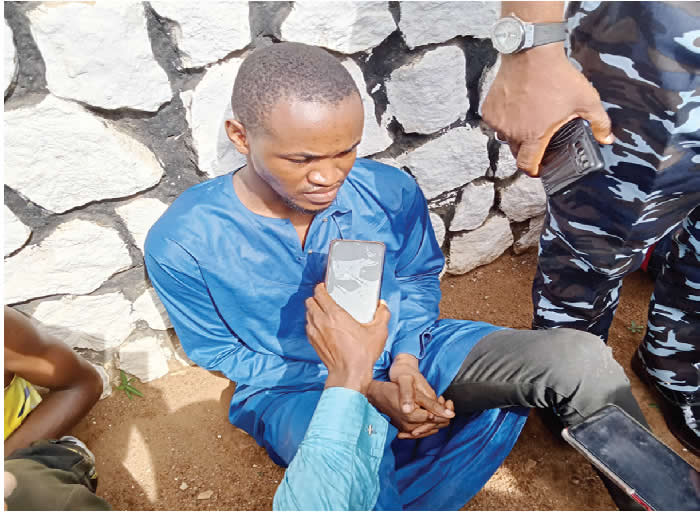 Abdulfatai Olagunju, a rusticated student of the University of Ilorin, Kwara State, who was arrested by the police, tells TUNDE OYEKOLA that he is a member of the Eiye Confraternity and recounts some of his exploits

What can you tell us about yourself?

I am Abdulfatai Olagunju Tijani Ifeanyi. I’m from Erin-Ile in the Oyun Local Government Area of Kwara State. I was born in the South-East, but my father is from Erin-Ile. I am 23 years old. I was a student of the University of Ilorin. I was in my third year when I was rusticated in 2021. Since then, I have been engaged in anything.

Which course were you studying at the university?

I was a student in the Department of Electrical/Electronics.

What led to your rustication from the university? Did you commit an offence?

The university accused me and three others of being members of a cult and they accused us of terrorising the students and disturbing the peace in the Tanke area of Ilorin. There was a report that we attacked and injured some students during one of our operations in the area. The university management constituted a panel and we were then rusticated.

Are you a member of a cult?

Yes, I am a member of a group. I joined the Eiye Confraternity in 2019 and I was initiated and rose to the position of ‘Ostrich’.

What does that mean?

It means the executioner, who is the number two man in the group in Ilorin.

Why did you join the group?

The police alleged that you are a robber and cultist, and that you had killed some people. Have you ever killed anyone?

After leaving the school, I still moved with my group. Yes, I have killed some people. After the initiation, as a member of the group, I was given a task to accomplish and I had to prove that I am powerful. If one accomplishes the task, that is if one can kill a target, that person gets promoted in the group. After my initiation, my gang members picked me as their hit man (executioner) to accelerate my rise to the number two position in the Ilorin zone.

How many people have you killed?

I cannot remember but I know that in accomplishing the task given to me, I have done it successfully and that is why I rose to become the number two man in the group in the state.

The police said you confessed to having killed three persons recently. Is that true?

Yes, it is true. I have killed some people in Kwara over rivalry. Those I killed were our rivals and my gang leader told me to kill them for my promotion to become the ‘Ostrich’. I remember that we killed one Ismaila Alabi, aka Abbey, a barber at his shop in the Agbooba area of Ilorin in April 2021, and also sometime in February 2021, we also shot and killed one Emmanuel. I cannot remember his surname but he was a student of Human Kinetic Education at the University of Ilorin. I cannot remember the name of the third person we killed.

Where did you get the gun and other ammunition you used?

I got the gun from my father who was a retired army officer.

What is the name of your father and where is he now?

My father is Major Abdulazeez Olagunju (retd.) from Erin-Ile in Kwara State. He retired from the Nigerian Army and he is dead now.

Did he give you the gun?

I took it from his room after he died.

Where is the gun now?

The gun is now with a member of my gang called Damilare Adegoke. He is at large currently and I don’t know where he is, but I know that he has the gun.

Have you ever been arrested before now?

No, I have never been caught. This is the first time. But on April 28, 2022, around 11pm, some policemen on patrol arrested me when some of my members and I were going for an operation. While others escaped, the policemen caught me on the allegation that I belong to a gang of thieves. It was that allegation that they brought against me.