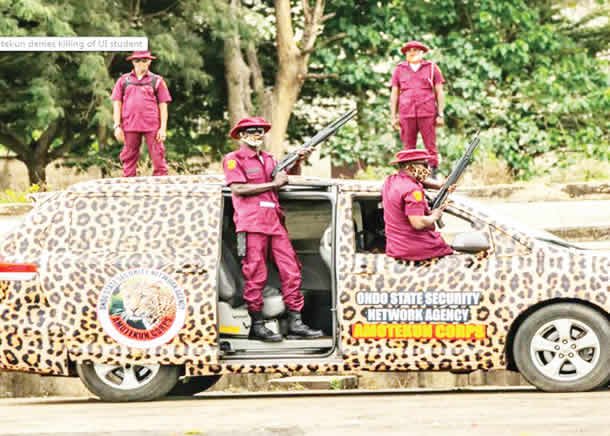 The Ondo State Security Network Agency, also known as Amotekun Corps, has arrested over 4,000 suspected criminals across the 18 local government areas of the state in five months.

The agency said the suspects, involved in various criminal activities, including kidnapping, armed robbery, human trafficking, and illegal possession of firearms, among others, were arrested between January and May.

The state Commander of the corps, Adetunji Adeyeye, disclosed this in a chat with journalists in Akure, the state capital.

Adeleye, who is also the Special Adviser to Governor Rotimi Akeredolu on Security Matters, said the corps was committed to making the state crime-free and would not relent in its efforts to eradicate crime in the state.

He noted that the crime rate in the state, going by statistics, had dropped by more 70 per cent.

He said, “On the average, between January and May 2022, we made about 4,000 arrests and through the office of the Director of Public Prosecutions of Ondo State, we have been able to send a reasonable number of them to correctional centres and prosecutions are going on, while diligent investigation is going on in many others.

“Also, comparatively, virtually all forms of criminal activities are on the decline in the state. Unlike before when kidnapping was an everyday thing, it is no longer as rampant as it was within the metropolis and even at the border towns; it is now becoming a thing of the past.”