In what started off as an ordinary concept, initially activated in the big brother house, soon made its way into attaining the feat unimaginable in history. Lush Hair with the collective efforts of interested fans joined hands to produce the longest braid of 105 ft, 2inches on September Saturday 17, 2022 at Ikeja City Mall. 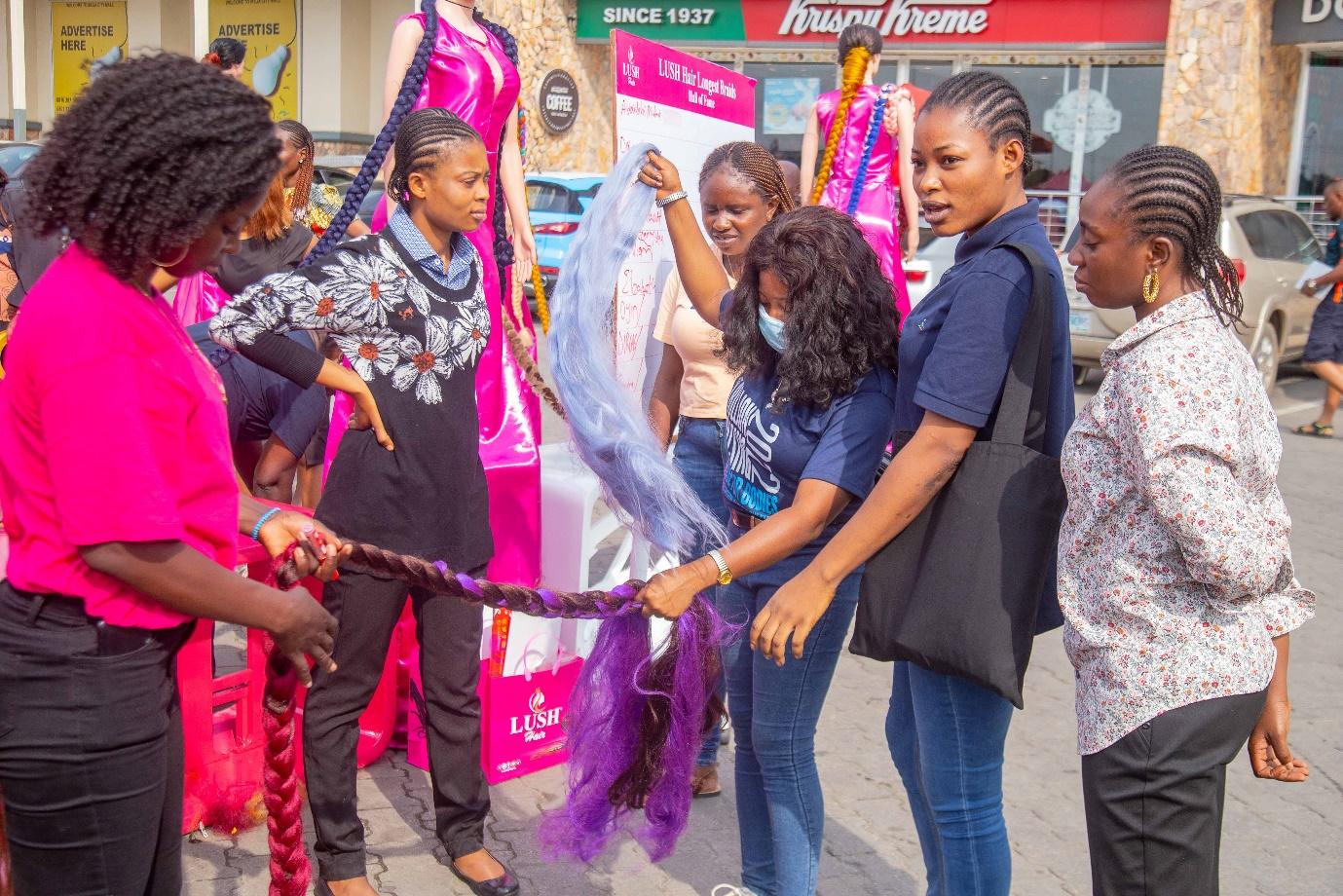 A record of 36ft long braid was officially set in the Big Brother house just a couple of days earlier during Lush Hair task. Housemates were divided into 3 groups to compete against one another in 4 stages of engagement activities i.e Stage 1: Step with Lush game, Stage 2: Find your piece Puzzle, Stage 3: Ring Toss and Stage 4: Longest Braid Challenge & Presentation. 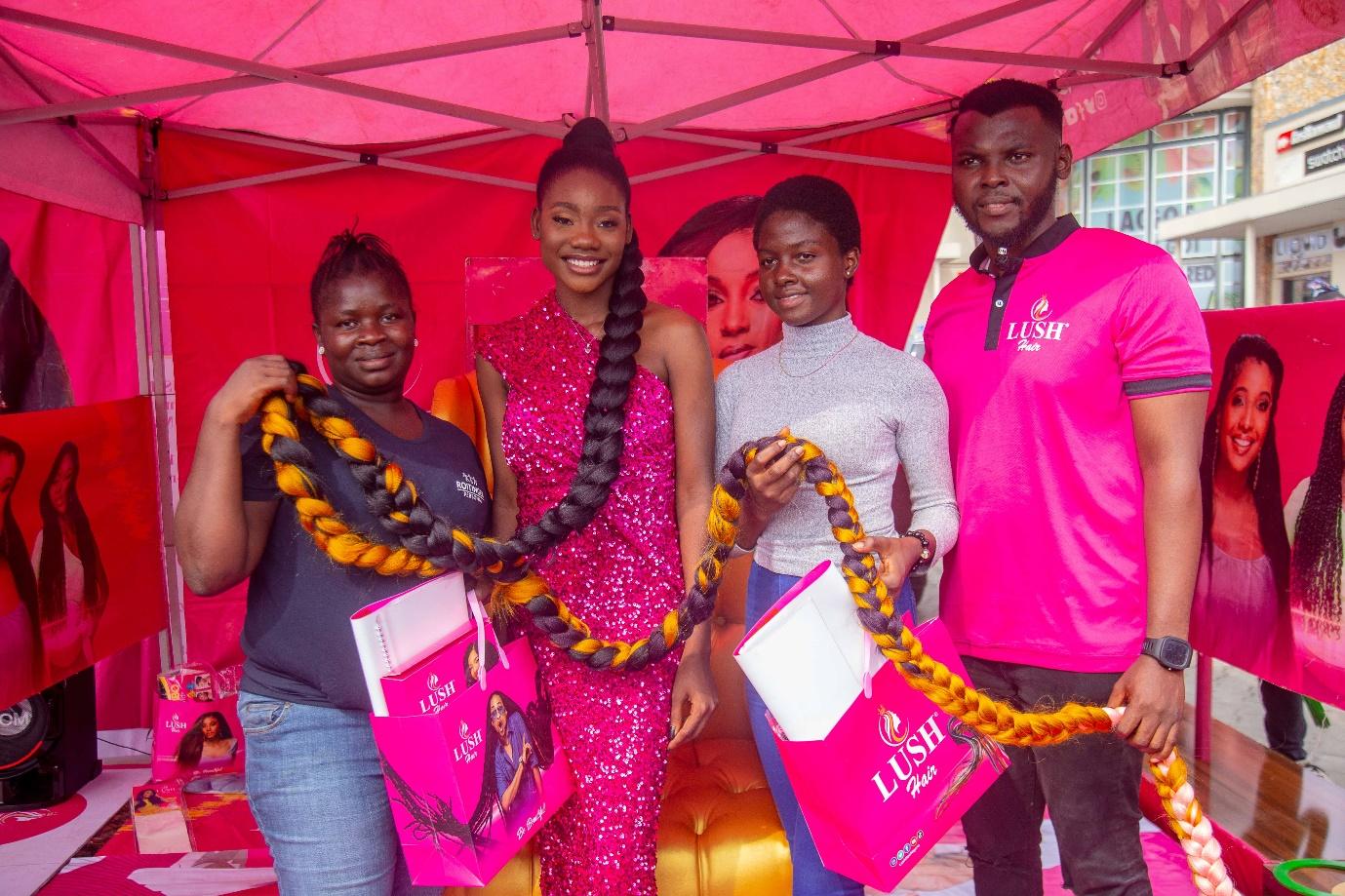 For the Longest Braid Presentation, the teams were challenged to design outfit from the scratch and weave out the longest ponytail braid on their representative, then present the rationale to the rest. 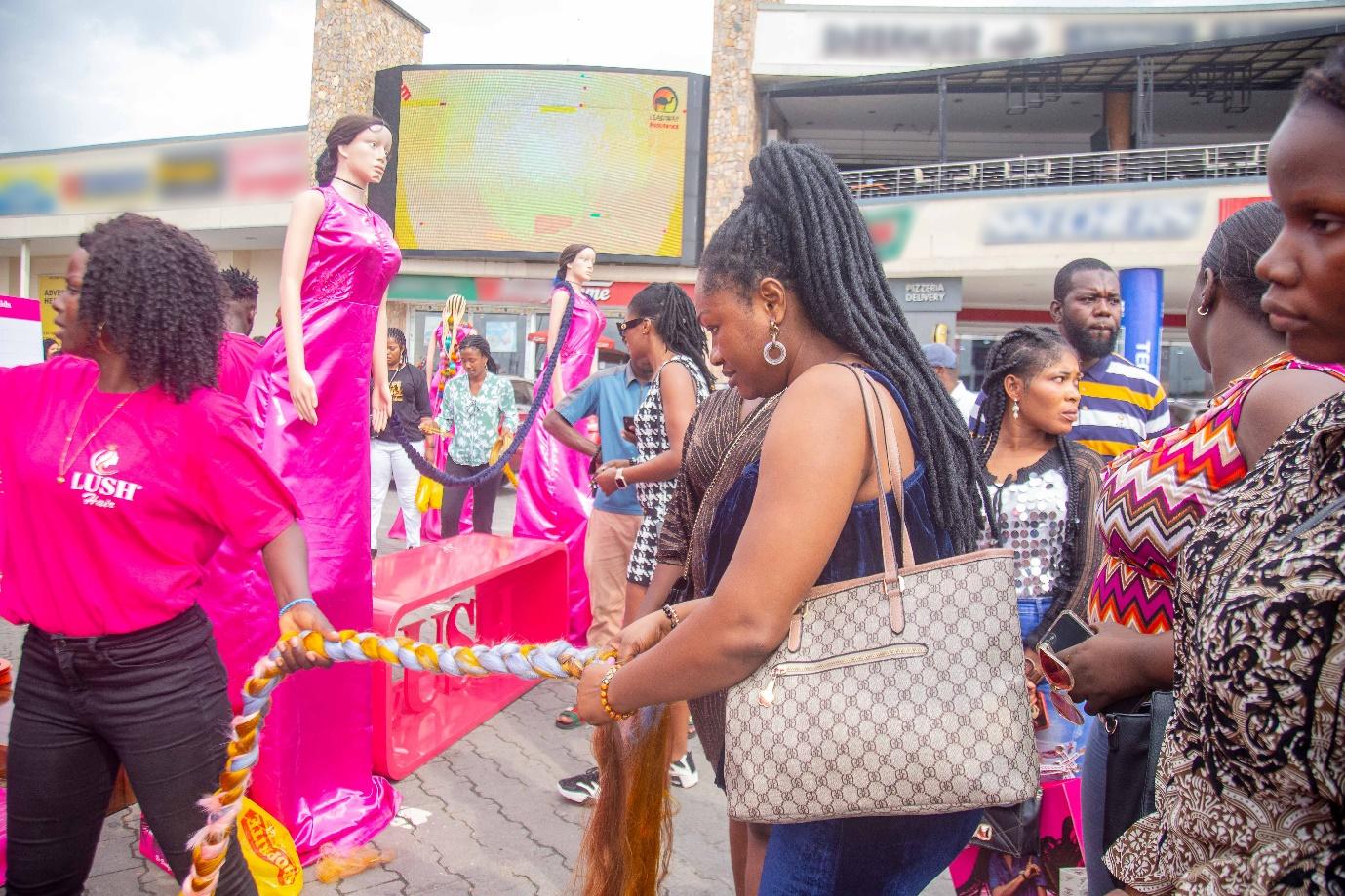 After an intense 90 minutes of competition amongst the three teams- Team Reinah-Twist, Team Kinky-Royale and Team Wow-Braids, the grand prize winner of 2 million Naira went to Team Kinky Royale who earned the highest points and came tops with- 36ft, followed by team Wow Braids- 34ft, 9inches, then team Rehinah Twist-12ft, 3inches. `
Earlier, on the day of the task, the hashtag #FlauntYourLush trended actively on twitter, while on the street of Lagos, giant looking mannequins were seen standing at different high traffic locations around Lagos to create awareness towards the Lush Hair /BBN task scheduled to hold later in the evening. The following day, same channel was equally explored to urge fans to join the brand the day after, at Ikeja City Mall to collectively surpass the effort of the winner of the longest braid challenge in the BBN house. 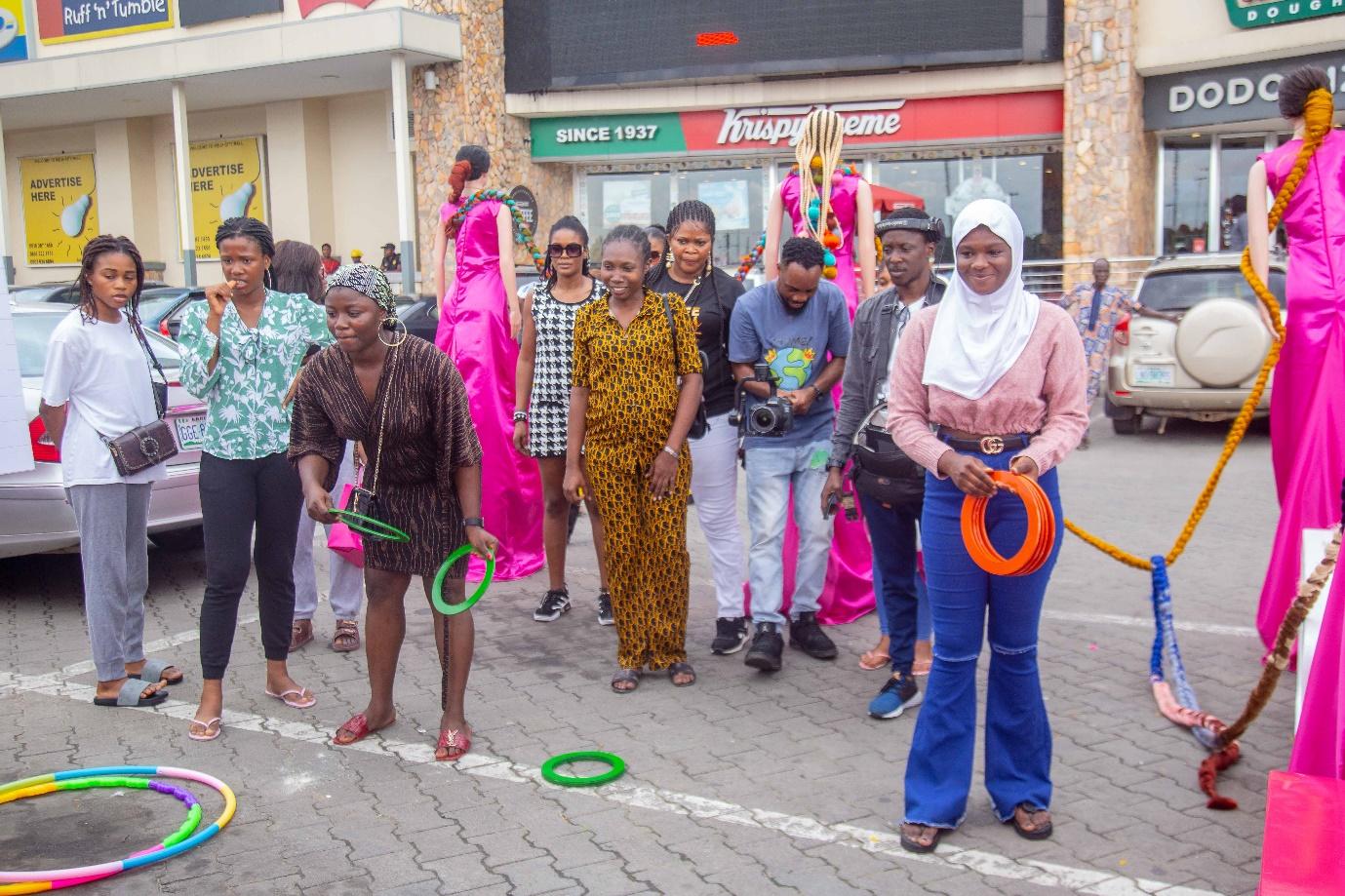 At the experiential event on Saturday, a beautiful tall dark-skinned model sat gorgeously at the center of the stall, where fans walked in, in numbers, taking turns to participate in the longest braid activity which eventually stopped at 100ft/ 2 inches.

Lush hair sure created a fun atmosphere and unforgettable experience for both the participant and audience. 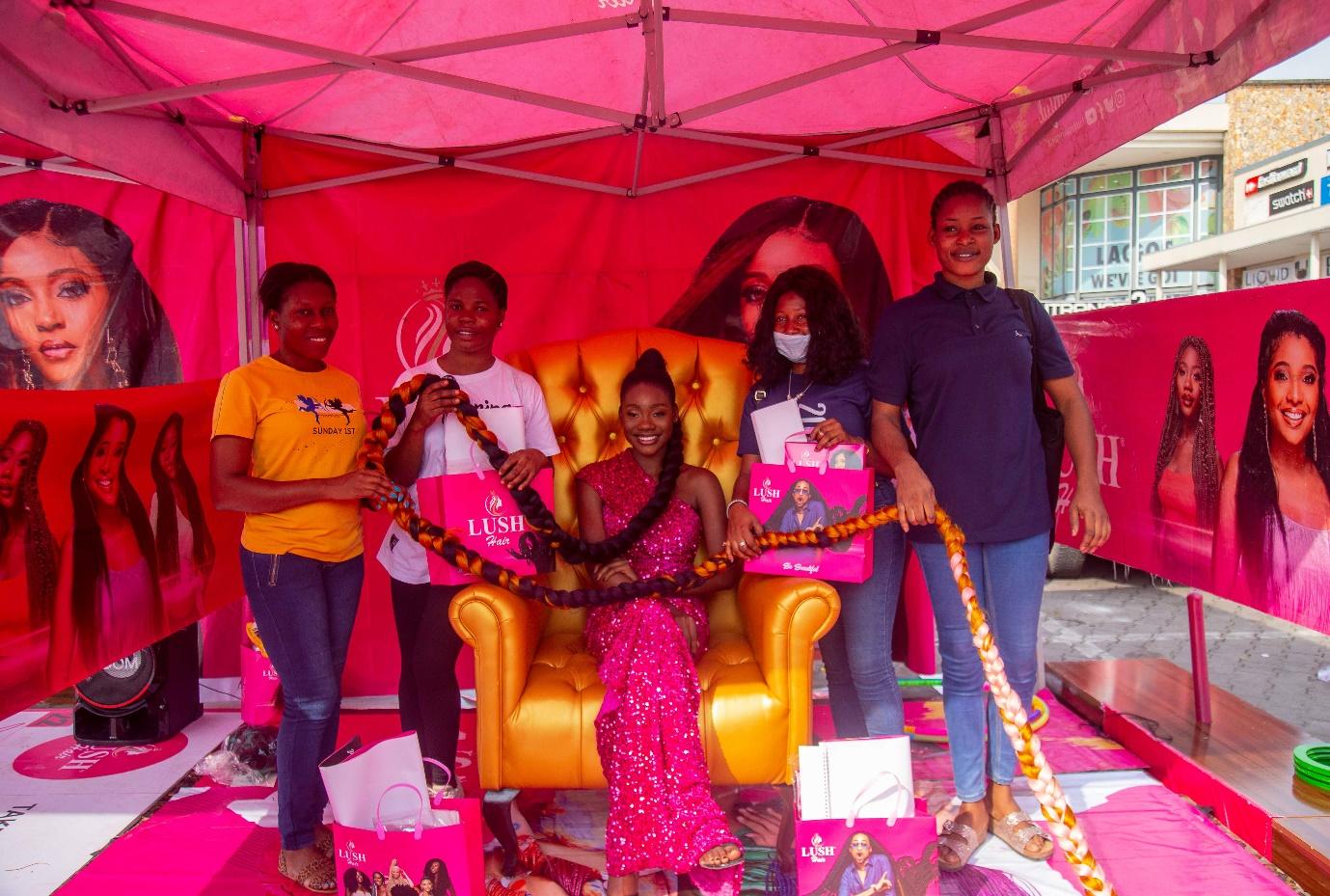 Those who participated in the challenge as well as winners of the games were not only awarded with goody bags, they equally got the opportunity to have their names registered on the Lush Hair Hall of fame as a symbol of honour participating in the longest braids challenge.

Music and games were available especially for the benefit of those who couldn’t participate in the braiding challenge, no one was left out of the fun.

According to the Brand Manager, Lush Hair, Mrs. Ritambhara Kakkar achieving this feat is quite unbelievable and we appreciate fans who have come out en masse to demonstrate support and loyalty to the brand. Being the official Hair sponsor of Big Brother season 7, we reckoned that what better strategy could we adopt in carrying our fans and other BBN enthusiast along in the fun and entertainment happening in the house, which was what birthed the Longest Braids Challenge execution in and outside the Big Brother house.