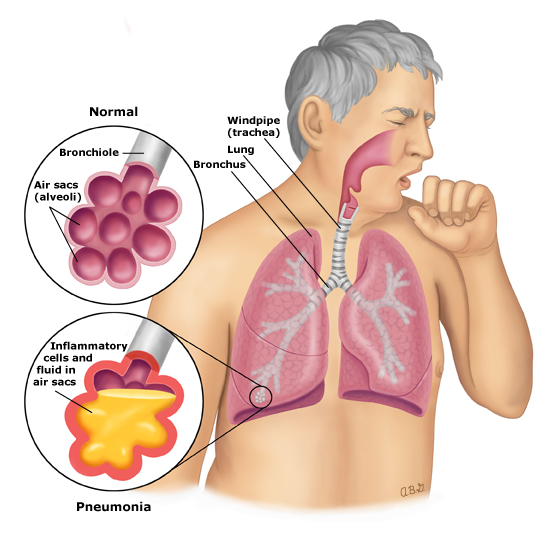 A Public Health Physician, Dr. Rahmat Odesesan, says pneumonia is not caused by cold contrary to the widely held belief by many people.

The health condition, Dr. Odesesan said, is caused by infection.

Odesesan, who is the Medical Officer of Health, Ikorodu Local Government Area, Lagos State, urged parents to avoid exposing their children to any form of smoke, stating that a variety of organisms, including bacteria, viruses, and fungi, could cause pneumonia.

Speaking in an interview with PUNCH HealthWise, the physician said parents should stop practices that could expose their children to the risk of pneumonia such as cooking with stoves indoors and poor hygiene practices.

Pneumonia, the World Health Organistaion says is a form of acute respiratory infection that is most commonly caused by viruses or bacteria.

According to the global health body, pneumonia which can be prevented by vaccines can cause mild to life-threatening illness in people of all ages.

It stated that pneumonia is the single largest infectious cause of death in children worldwide.

Odesesan noted that pneumonia is one of the major killers of children under-five, but could be prevented through good nutrition and hygiene practices.

The physician explained, “Smoke affects the immune system and exposes the person to the risk of pneumonia and other infections that affect the lungs.

Pneumonia is airborne and once it affects the lungs, they will not be able to function properly.

“People should avoid cooking with stoves and firewood indoors to avoid exposing children to pneumonia.”

According to her, people should not use stoves indoors.

“They should cook outside where there can be good ventilation. Don’t pollute the air in the room. Using the stove inside the room will make the air there to be concentrated. And it is dangerous to the lungs whether to the child or the mother.

“Do your cooking where there is ventilation. The room is compacted. So, any form of cooking should be done outside”, she said.

Continuing, the physician said pneumonia has nothing to do with the cold.

She noted, “Some people feel that pneumonia is cold, but this is not true. Some people think that when you expose the child to a cold, he will be having pneumonia. No. It is an infection. Pneumonia has nothing to do with the cold.

“If you expose the child to people that are already infected in a crowded area, that can make the child come down with pneumonia.

“People should stop bringing their children with pneumonia late to the hospital when they are breathless and would be requiring oxygen.”

On the symptoms of pneumonia in children, the physician stated that children with pneumonia might have difficulty in breathing, fever, shock, loss of appetite, and restlessness.

“If you notice any changes in your child, take him to the hospital for proper medical evaluation,” she counseled.

Commenting on prevention, the public health expert said there are a lot of things that could be done to prevent pneumonia.

She noted, “Once you boost the child’s immunity by giving them good food and practicing good hygiene by hand washing you can risk their risk of pneumonia.”

WHO says pneumonia is the single largest infectious cause of death in children worldwide.

“Pneumonia affects children and families everywhere, but deaths are highest in southern Asia and sub-Saharan Africa.

“Children can be protected from pneumonia, it can be prevented with simple interventions, and it can be treated with low-cost, low-tech medication and care.

“Pneumonia is caused by several infectious agents, including viruses, bacteria, and fungi. People at-risk for pneumonia also include adults over the age of 65 and people with preexisting health problems,” WHO said.

The global health body noted that preventing pneumonia in children is an essential component of a strategy to reduce child mortality.

“Adequate nutrition is key to improving children’s natural defenses, starting with exclusive breastfeeding for the first six months of life. In addition to being effective in preventing pneumonia, it also helps to reduce the length of the illness if a child does become ill,” it noted.